Oh, the t-shirt. We have lots of t-shirts hanging around here, many  of them with stains, or too small, or out of fashion. Max's Disneyland shirt fell into the too small category, but never fear, we can rebuild it. All you need is a little fusible web, a clearance t-shirt, and a little machine stitching and Bam! a new t-shirt. 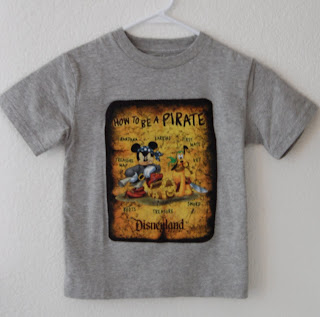 Sometimes my screen prints don't come out exactly right. I had a shirt where the placement was off, so a few snips and the shirt becomes a patch. 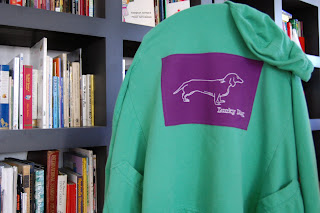 The backs of the old t-shirts become blanks for screen printing, or material for sewing projects, or even rags. The possibilities are endless!

Sadly, I have no drawings to share this week. It seems the only thing I've used a pencil for lately has been to write math problems. I'm going to take a little week or so blogging break to focus on my kids for a bit, but I do have more in store to share with you! See you in a week!
Posted by Casey at 7:00 AM No comments: 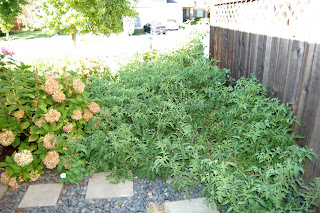 The tomato plant has taken over. 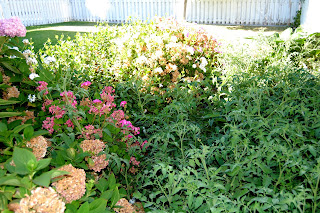 There used to be a path here. 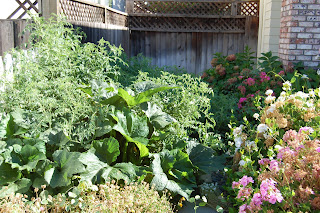 Even the zucchini can't compete.  And still, no tomatoes.
Posted by Casey at 7:00 AM No comments:

Email ThisBlogThis!Share to TwitterShare to FacebookShare to Pinterest
Labels: gardening

Clothes, clothes, clothes! It's been all about fashion around here lately, thanks to wardrobe refashioning and the Yudu. I have a sizable pile of clothes that have been hanging around for at least a year, waiting to be altered. AT the top of the stack were two blouses that I have never even worn. Both were not only too unstructured, but with oversized collars and full short sleeves, my shoulders looked more massive than any NFL linebacker's. What possessed me to buy them, when the proportions were so bad? I know that they were both under $10, but even so, $20 so they could sit in my closet for a year? Alas, my computer decided to dump the last two year's worth of pictures, and I had not backed up after the before shots were loaded, so you will have to imagine those purple monstrosities. The fix, however, was quite easy. 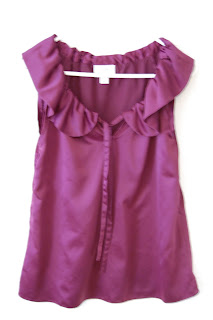 I simply removed the sleeves. The deep purple one looks great on. The floral collar shirt still has a bit of a maternity look on, but an empire waistline tie didn't help, so I'm leaving it as is, for now. I think I'll keep my eye open for a little second hand cardigan  and sew the collar onto it. I think it would look smashing on a sweater. 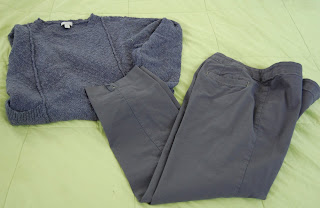 I also decided to face my phobia and dye some clothes. You see, I've had a bottle of Ritz for more than a year, but I could not shake the neurotic idea that my washer would hide bits of navy dye that would seep out and leave little blotches on all of my clothes for years to come. Yes, I know that sounds loony, but it's the truth. Being in possession of a great pair of cigarette pants that were an unfortunate baby poo color (I swear it said khaki online) and a sweater that was chartreuse instead of green (another online purchase), I threw cation to the wind and salt in my washer and had a go. Do you know what? The washer cleaned up just fine, my clothes are now a decidedly better gray blue, and the stained orchid  tee shirt I also tossed in is a fabulous deep purple. Again, I lost the before pictures,so you'll just have to imagine the hideous colors. 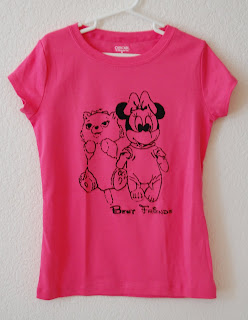 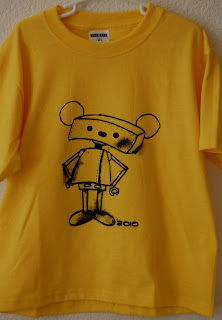 The Yudu got a little love yesterday as well. The first design is just for Madeline and her cousin. Marie and Minnie are her favorite stuffed animals, and her cousin is her best friend. They got matching shirts, of course.


The second shirt is also for family, inspired of course by that famous mouse and Bad Robot.

Whew! That's it for now! Wednesday I'll post some more LSNED pages, and hopefully some from the Sketchbook Project, if I can get my mojo flowing!

Email ThisBlogThis!Share to TwitterShare to FacebookShare to Pinterest
Labels: altered clothing, made by you mondays, sewing, wardrobe refashion

Learn Something New Every Day 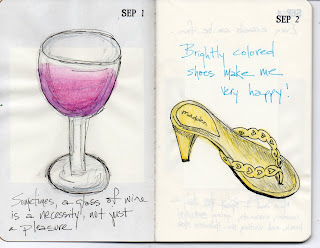 I didn't think I'd participate in LSNED this year, since September is a crazy busy month for us, but when does that ever stop me from piling it on? I'm taking a very no stress approach - a tiny Moleskine notebook, a small sketch or photo, and that's about it. I've already skipped a couple of days and haven't done Tuesday's entry, but oh well. I'm just surprised I've gotten this far! Is anyone else playing? I do love Shimelle's classes. Her lessons are always so well written and the photos are inspiring. If you've never taken an online class from her, I highly suggest you try one. As an added bonus, her annual classes, such as LSNED and Journal Your Christmas are lifetime memberships. Once you buy the class, she automatically sends you the prompts every following year, free of charge. There is always an active forum, too. 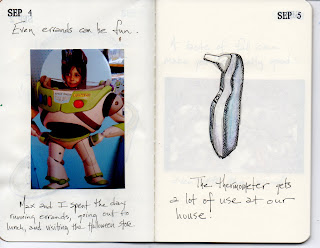 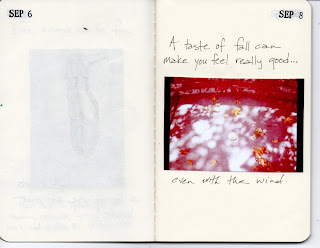 Things have not been going as well with my Sketchbook Project. I have the pages prepped, but only two are actually worked on, and they're not complete. I have a concept, so I don't know why it's been so slow. I need to kick my own butt.

I made a few small changes to four pieces of clothing that have been rotting sleeping in my closet for way too long. I ran out of light this evening to finish the after pictures, so I'll save those for another post.

I had a request to post a picture of the seat protectors, from my tutorial, as I use them in the car. Sure! It has been added to the original post.
Posted by Casey at 7:00 AM 1 comment: