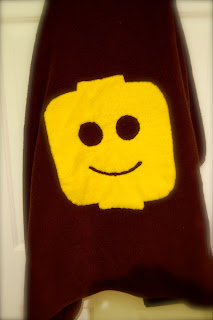 This is one of my favorite projects, and it's so easy! I don't have a tutorial, but it's simply an appliqué on a store bought towel (I got mine at Target for $5). I used fleece for the lego head. I chose fleece because it's soft and I had it on hand, but a micro-terry or french terrycloth would work as well. I did a Google search for lego heads and then drew the face on Wonder Bond free hand. I followed this procedure for the appliqué process, but I used a pressing cloth over the fleece (it melts!) and a lot of extra time to get the bond to stick. A little stitching and you have a custom Lego towel! It was Max's birthday present and has endured months of washing and is still going strong.
Posted by Casey at 11:10 PM

Email ThisBlogThis!Share to TwitterShare to FacebookShare to Pinterest
Labels: applique, birthday, DIY, Lego, made by you mondays, sewing, towel