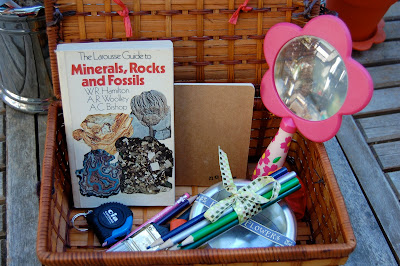 Learning kit number two - the geology basket. We are studying geology along with space, and we like to get hands-on with our work. I used a recycled basket (once the home to Numi teas), and added an extra clasp and handle to make it more portable. The handle is simply a corrugated cardboard  tube with raffia threaded through and tied on the underside of the lid.  A button and cord provided extra security to the front of the basket. 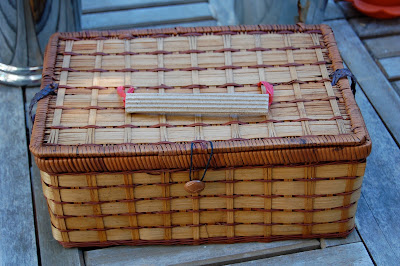 I gathered materials we had around the house for supplies. I included a magnifying glass, rock guide, notebook, pencils, colored pencils, a sharpener and eraser, small tape measure, paint brushes and a specimen box (i.e. recycled scrapbooking flower tin). It's easy to take outside for a little backyard geology, and while I don't tote it on hikes, it's nice to have it all in one place so I can throw the supplies in my backpack as we head out the door.
Time to take a hike!

Email ThisBlogThis!Share to TwitterShare to FacebookShare to Pinterest
Labels: education, geology, kids, learning kit, made by you mondays

Solar System in a Cylinder 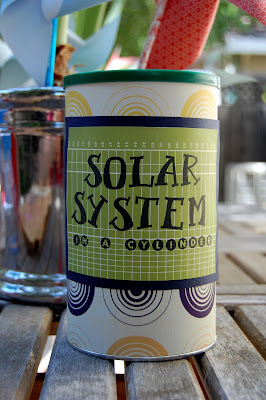 I was browsing the Playful Learning and Imagine Childhood websites this weekend, and their products reminded me how much I love kits. The passion started early, when I would walk into those Sanrio mall stores and salivate over the little boxes filled with Hello Kitty stationary, stickers, and miniature pencils. Years later, I loved walking the aisles of Papyrus, lingering over the beautifully packaged cards and wrappings. Oh, and gift baskets, with all of those special little treats all bedecked with ribbons? Sigh.

Educational kits are fabulous, but often expensive. Why not make them myself? I could tailor them to what we are studying this year, use up some of those craft supplies that seem to breed in our home, and maybe motivate the kids in the process? Introducing.... 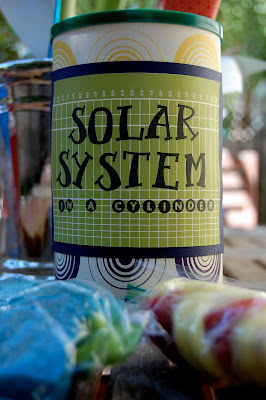 Yes, the entire solar system in a can. Actually, it's a bunch of wool roving in a decorated coffee can. I chose bits of roving in colors to match the planets, then packaged each in a baggie (to protect it from the coffee smell that still filled the inside of the canister). The kids first had to decide which baggie was which planet (with the help of a book we read on the solar system), and then we tried turning the wool into felted balls. We used a You Tube tutorial at first, but it didn't go so well. Darling son said the wool made his hands itch and promptly left the activity. Considering he's allergic to everything, I didn't argue. Then I recalled that Amanda Soule had a tutorial in The Creative Family. I knew it would be kid friendly and easy, and it was. We used the kitchen sink instead of bowls outside (it was ninety degrees, after all), but the balls came together much better. I highly recommend the book, by the way. It's full of great projects and packed with good old fashioned inspiration.

Interest lasted for about two balls (it is time consuming), so I ended up doing the rest. I loved the process - very meditative. We set them outside to dry: 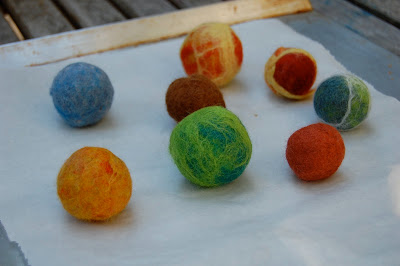 The kids have checked on them several times now, and are more excited about putting together a mobile with them when they are done. I haven't decided what to make the rings out of yet. Felt? Colored wire? I'll probably let the kids have the final say. Overall, they enjoyed most of it. I liked using up some supplies and having a project wrapped and ready to go. I have one other kit done that I will share next week, and more in the planning stages. Maybe I need to make a few adult ones as well. Who says that kids are the only ones allowed to have fun? 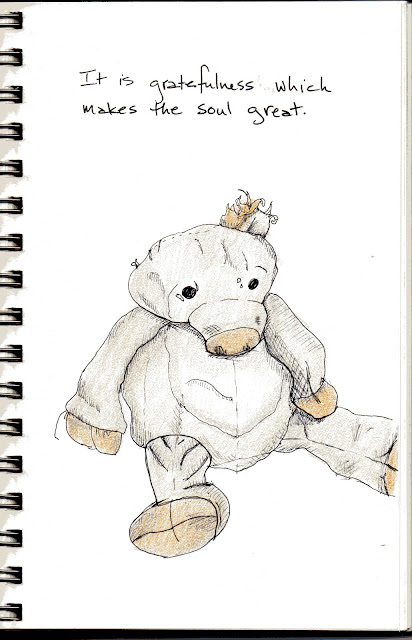 Homeschool started today, and with it a new routine for all three of us - the art gratitude journal.  The plan is that each day we will journal to a quote from this book:
a wonderful collection, by season, of quotes relating to gratitude and peace. There are religious quotes from all world faiths, as well as secular quotes. I bought it last year after seeing it on my moment of Zen blog, SouleMama. I decided to have the quotes pre-written for the kids, so they could just glue them in and focus on the art. With Madeline's motor issues and Max's distaste for writing (unfortunately cultivated during first grade at public school, where benchmarks dictate paragraph writing for six and seven year old's, despite the developmental inappropriateness of it), I wanted them to see this as a joyful exploration, not an assignment. Here are their results: 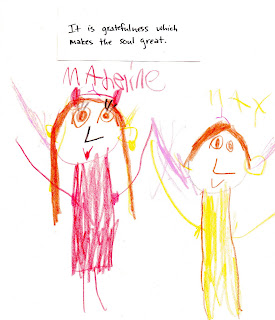 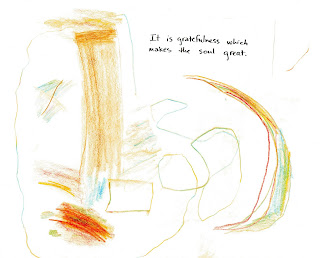 Max bought a rainbow colored pencil at the HSC (Home School association of California) conference Saturday, and was busily experimenting with what it could do. Madeline produced her page and two more before we moved on. I was stumped at first, trying to decide what I would do with my page, when I saw Piggy on the table. If you know my son, then you know Piggy. Piggy has been his constant companion for the last six years. He has lost one ear and his tail, and the second ear is a tangle of threads. He was once a lovely peach color, but now is essentially gray. But he has provided so much comfort over the years, and so much love, that he really is a figure of grace.

Yes, we have found a new morning routine.
Posted by Casey at 8:17 PM No comments: