The Problem With Math 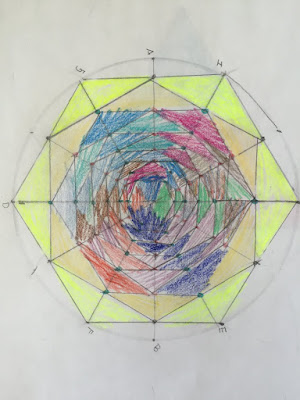 October was a beautiful month. The weather was warm. We took a vacation. And my son told me he was enjoying geometry. Enjoying geometry may not sound like an earth-shattering comment, but it was for me. Math has been a constant struggle for about two years now. It hadn't always been that way. When he was young, math was one of his favorite subjects, next to history. He was quick to understand concepts and could do most calculations in his head. He was confident in his skills. Then we hit the big stuff - four digit multiplication, long division and the like. Stuff that I didn't think you could do in your head. Steps you had to work out on paper. He hates to work out stuff on paper. He hates lots of tedious steps. He fought me constantly. We struggled through fifth grade math.

This year we went back to a full Waldorf curriculum, including math blocks, starting with geometry in October. In Waldorf,  sixth grade geometry is all hands on, making drawings with compass and straight edge - no calculations or formulas yet. He loved it. He looked forward to the drawings. He enjoyed the process and the coloring of the design. It was wonderful; yes, almost blissful. Then October ended, and so did geometry.

I was using Jamie York's Making Math Meaningful curriculum and daily practice. I think it's a good program - a mix of mental math, word problems and review problems of previously learned material every week, with only a few problems of each. It didn't look overwhelming, and yet we were back to the same struggle. He wouldn't finish his work for the week, or simply write down random numbers for answers. Eventually, he just refused to do anymore math. Ever. Period.

I would love to tell you that I handled all of this with the utmost grace and patience. I have tried to encourage and offer support. I have also yelled. I have threatened. I have predicted a life of burger slinging and poverty wages. Of course none of that made any difference. Of course it only made things worse.  We were both frustrated.

What I had also been doing was researching. It's a natural response for me, and it has served me well over the years. I had compiled lists of books and web sites. I was reading articles and going through curriculum. Before Christmas, I just happened to open an Amazon sale email one morning. Normally, I delete them without evening looking, but for some reason I opened it and there was a picture of Mathematical Mindsets, a book from my wish list, with the notice that it would be going on a flash sale at noon. I took it as a sign and bought the book. Yes, it was divine intervention.

I began reading Mathematical Mindsets in the week before Christmas and I thought, "I want to discuss this book with other moms." I wanted the kind of conversations I had during inspiring in-services when I was a classroom teacher. I wanted to pick brains, compare stories, dig deep into the revelatory information contained between those pages. Perhaps my friends might be interested? Perhaps there might be more? I had been watching the ever-inspiring Julie Bogart on Periscope and had joined the Bravescopes Facebook group. Julie often speaks of having "big juicy conversations" with your kids, so why not have them with other homeschooling moms? I let the idea lounge around for awhile because I was nervous. Nervous that nobody would be interested. Nervous that I would start a group with myself as the sole member. But once I have an idea in my head I don't let it go without a fight, so I took the leap and started the group, Big Juicy Conversations About Math. It's been about a month, and we have almost 100 members!

I intend to share our math journey here as well as in the group. To reflect on what we did right when they were young. To analyze where we went wrong these last few years. To begin to chart a new course, a new way of approaching math without tedious steps and a page full of practice problems. To bring back the joy. I hope you will join me.
Posted by Casey at 2:30 PM