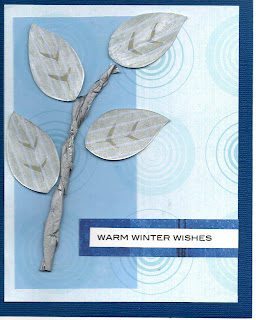 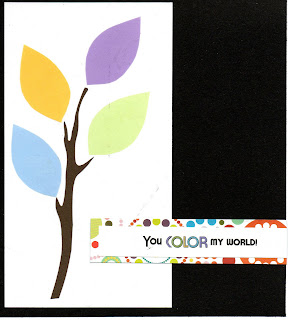 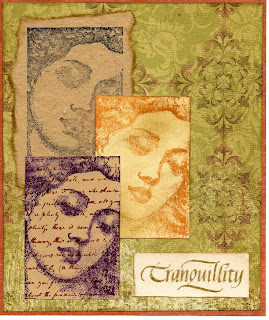 A discovered a great blog called card positioning systems. It's like a weekly Becky Higgins sketch for cards, with examples of each sketch from her designers. Great source for ideas or when you need to put a card together quickly. There's a DT call, so I threw my two cents in. There's such competition for these now, especially since it's international, that I never really expect to make one, but you never know. It's also a good motivator to keep producing. I made two cards from her sketches. For the branch sketch, I made two versions. The first was the winter card, with the branch made from rolled tissue paper. It looks better in person - the tissue got squished a bit when I scanned it. It is the year of color for me, so I really liked the bright vellum leaves on the second card. Everyone was asleep, of course, when I made them, which was a real bummer because I would have appreciated a little input on which card to choose. I ultimately went with the color one, but later Matt actually said he liked the winter one better. So here they both are; which do you prefer?
Posted by Casey at 1:07 PM