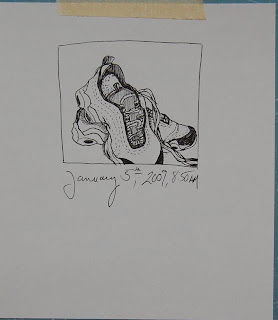 So here is the first batch of daily drawings. Some better than others, but it's been a doable task so far.  As for the Dance Dance Revolution I mentioned in a previous post, well, maybe I won't be working out to that so much. I did just fine with the DJ tutorial, but they seduce you into this sense of accomplishment and then BAM! the real song starts. And then little people aren't on the dance pad anymore. And the DJ doesn't call out the steps. And those direction arrows come a lot faster, and you're trying to follow the dancers on the screen, and once second later, you're booed off and the game is over. Thank you Dance Dance Revolution, for crushing any dreams of dancing I may of had, and making me feel really, really old (although the kids thought it was HILARIOUS!)
Posted by Casey at 9:57 PM