So, it has been a whirlwind for the last five days. Last Thursday Max had yet more appointments, first with the nutritionist, then with the allergist. The allergist ran about an hour behind, so by the time we got in there, it was almost four. Max didn't take it well. He screamed for at least ten minutes straight during the scratch test, and proclaimed at the top of his lungs that these "doctors were all trying to kill him!" Yah, it was fun.

However, he tested positive for wheat. Starting with that night's dinner, we went gluten free. He had tested negative for Celiac through a blood test, but it wasn't the full three part panel and they are notorious for false negatives. We were scheduled for an endoscopy to test for Celiac, but I canceled it. Max declared at the allergist that this was it, he was done with appointments, and I promised this would be the last. The therapy for the allergy and Celiac are he same, so I figured we would just go with the diet and see what happened. Well, this is what happened - I went through gluten withdrawal!

I have been reading a lot about Celiac, since that's where the best diet information is found, and not only did I find many of symptoms that matched Max's, but me as well (it is an inherited disease). The first full day of the diet, the gluten withdrawal symptoms began, too. Basically, all of the nausea, GI problems and gas that I've had for years suddenly got much worse! That pretty much confirmed for me that we were dealing with Celiac. I actually got excited when I read that tooth discoloration and loss of enamal were symptoms. Max's front teeth have always been discolored, and neither his dentist nor his doctor could tell me why. I always suspected that it had something to do with his weight, and some deficiency!

There is much, much more to going gluten free than giving up bread. It is an ingredient in just about any processed food you can think of, because it is in malt flavoring, caramel coloring and many other common additives. Cross contamination is another huge issue. I had to get a new toaster, cutting board, and replace many pans and utensils (any finish that is porous or has a scratch where gluten can get in has to be replaced). Not cheap, but it actually felt good to streamline my kitchen.

So it's day 5 and I felt better today. I hope this means my symptoms will continue to get better. Max was really cranky for the first three days, but now seems pretty much back to normal. Max has taken the diet to heart, and can actually sight read the words "gluten free" on food packaging! Before our crazy week, we all started nature journals for the summer. To end this all on a lighter note, here are some of our pages:

From Madeline and Max: 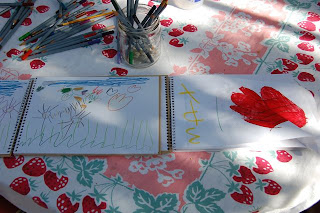 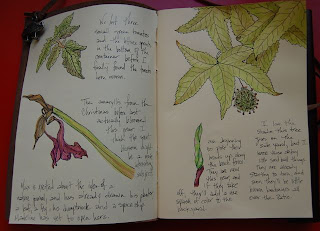