On the Hamster Wheel

The beginning of the school year always makes me feel like that teddy bear hamster running as fast as those little legs can, around and around and around to nowhere. I have not settled into a pleasant rhythm of the day yet, but I know it will come in a few weeks. It's just hard managing until then, sometimes. Today Madeline hoodwinked me into a two and a half hour walk (the girl is a born cross-country runner, I tell you! Obviously that does not come from my side of the asthma inhaler), on a fairly suburban portion of our Marsh Creek Trail. We still practiced identifying trees and birds, but it was a lizard that ran across the sidewalk off of the trail that really captured her fancy. She tried to literally capture it, but with no luck (but much luck for the lizard, I do believe). 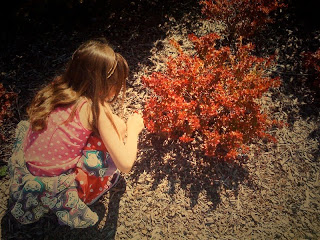 A new design came off of the Yudu this weekend, created especially for Aunt Dian (wink). 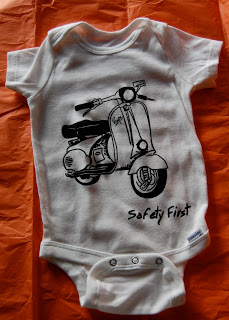 (Her shirt was much bigger than this one, by the way.)
Posted by Casey at 7:00 AM No comments: 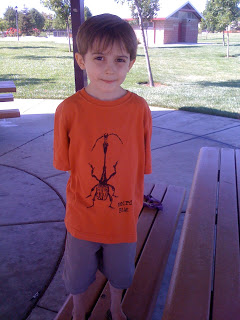 Max is sporting the newest t-shirt design, from an old sketch. Who doesn't want a creepy long necked bug crawling up their shirt, right? Or maybe it's just me. I think I need to make some bags with this design because the image is so crisp on cotton fabric. It looks good on the knit, too, but the details are even sharper on the cotton. I bought the 220 screen to use on paper, and I'm curious to see how it works on fabric, too. I think I need to make a trip to Goodwill to buy a bunch of test t-shirts. I also think I need to get a better squeegee for the Yudu. I'm getting some over saturation and I think it's due to the hard squeegee. I just can't believe they want $15 for their "deluxe" one, which should have been standard. Well, I guess that's what coupons are for. 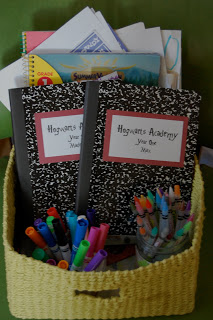 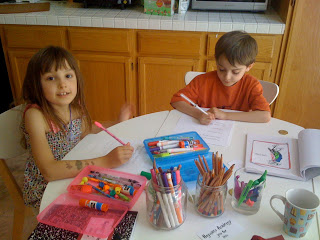 A brand new adventure started yesterday - homeschool. Not just any homeschool, though. The kids have signed up for a magical journey at the Hogwarts Academy. Since they are both so crazy for everything Potter, I decided our first unit will be everything Harry. Their classes include Herbology (botany), Potions (chemistry), Care of Magical Creatures (zoology), Transfiguration (arts), Magical Math and Enchanted Reading. My trick now is figuring out how to balance the homeschooling with work (I'll still be teaching a couple of days a week) and my art. Heaven knows how I'm going to fit the cooking, cleaning, and gardening in there, but that's the magical part, right? So please forgive me if the posts are a bit irregular over the next few weeks as I get this new schedule all figured out. I'm confident though that it will all come together, like magic! ;)
Posted by Casey at 8:02 AM 3 comments:

Ten school days until the end of the year - nine for the district my kids attend. Is your life as crazy as mine right now? While ten days sounds great, the amount of things I need to accomplish in those ten days seems insurmountable at times. It will all get done in the end.  The blog posts may be short and spotty for the next two weeks, but I did manage to run a new t-shirt design: 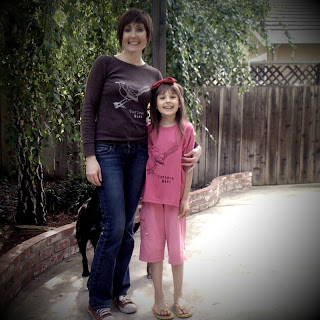 You'll have to excuse the chipmunk cheeks - I had some dental work done that day. I so love that she still wants to match with me. I know that all too soon the idea of having matching clothes with mom will be on par with math homework and flossing her teeth with sandpaper. So I'm enjoying the moment while it lasts.
Posted by Casey at 5:17 PM 2 comments: 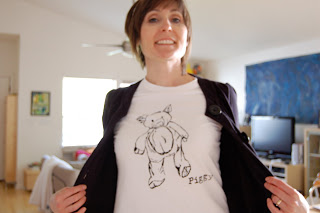 My second attempt was much better than the first.  I made a run of t-shirts with a sketch of Max's most beloved friend, Piggy. A few things I learned about the Yudu for this run:

*Use a lot of ink. The instruction video shows just a squirt along the top, but you really need a big, thick goop.
*When rinsing the photo emulsion film off after burning a screen, let the water sit on the screen for a few minutes. After rinsing for a few minutes, use soft pressure with a sponge on the emulsion side on spots that haven't rinsed out.
*I made extra platens from foam core, by simply tracing around the plastic one. When I loaded it on the machine, I just stuck an extra platen underneath, or a stack of magazines to make up for the lack of foam. I simply tightened the fabric around the platens with masking tape.
*The $4 foam core worked just as well as the $20 plastic platen.

Now the orders are coming in from friends and family. That's okay. They can wait for the Etsy shop like everyone else;)
Posted by Casey at 10:53 PM 1 comment:

**Blogger is having issues. I uploaded a new banner yesterday, a picture, and today's picture, and all have disappeared, with error messages. Sorry! Hope it gets fixed soon!

I got a Yudu machine this weekend! It's that new screen printer from Provo Craft.  Matt had tried to get me one for Christmas, but they were all sold out. Michael's had a good deal on it last weekend, so I decided to take a step up from Sharpie t-shirts. Way back in the Stone Ages (of middle school and high school), I did a little screen printing. This machine changes the process a bit. Now, I have to run a disclaimer here - I have only used it once. I've run into a few roadblocks in my quest to pull a bevy of t-shirts.  I started by scanning a sketch into Photoshop, cleaning it up a bit and adding text. Next, I grabbed my printer transparency that came with the machine, and ran it through the printer. It ran right back out, telling me I was out of paper. I tried it again, with a different paper setting; same thing happened. After messing with all of the available settings, I looked up Epson on line and discovered that my printer won't do transparencies! Nuts. (Yah, Cannon, my next printer will be coming from you!)


No worries, you can draw with a Sharpie on the transparency instead. So, I traced my template and even the text looked just like the print out. Next, I adhered the photo emulsion sheet to my screen. This was new for me. Back in the day, I painted the emulsion on. After it dried, I placed the template on the machine's light table and burned the screen. However, when it came time to rinse, some of the detail lines on the template image began to peel off. I am guessing the screen may not have been wet enough when I put the film on, or maybe the kitchen was too bright.  Time to do a test run on scrap fabric.

My first pull wasn't so great - the text was over inked. My second pull was better, so I loaded up a t-shirt for the next pull. Well, it took a few runs to get the image filled in, and some detail lines were still a little faint. My big guffaw happened when I took the t-shirt off - I accidentally hit the collar on the wet squeegee, so I had a nice fat, black ink mark on the top. Yikes! I tried to carefully pull the wet shirt off of the platen, which wasn't easy because the adhesive on there is really strong! I finally got it off and rushed to the sink, trying to wash the collar without getting the print wet. Here's the result: 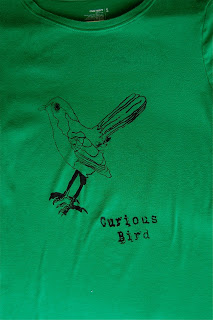 Okay, so the first run wasn't perfect, obviously. I spent some time poking around the web and YouTube, watching videos. I have noticed that I was definitely not using enough ink, and I probably should have weighed down the machine even more during the burning process. I discovered someone who made their own platens (the form you put your shirts on for printing) from plastic board (which is great, because those things are $20 each, and you need multiples if you are going to make more than one shirt at a time), and I also discovered that you can use the liquid emulsion on the screens. I think the liquid is better than the photo sheets, and much, much cheaper! Yudu supplies are expensive, and the machine is very large. However, I love that the burning, drying and pulling are all done on one unit. The screens are not the best quality compared to professional screens (which are much tighter), but I think for the work that I do they will be fine. As I play with this more, I hope I can find other ways to keep the cost of production down.

I had hopes to run some more designs last night, but the girl came down with a wicked fever and flu, and I spent the night taking care of her. Hopefully I'll have something new to share with you tomorrow, as long as her fever stays down!
Posted by Casey at 10:19 AM 2 comments: